What is interactive? A written letter answered by the person who received a letter could already be labeled as ‘interactive’. That’s the problem with all these advertising people today. they all think up new ways of labeling themselves as being special. And we are doing the same thing on this website, but just to keep it comprehensible for you…the audience. To keep eh….interacting with you.

Interaction is something Peter has done since he made the introduction campaign of MSN (which was not an interactive campaign by the way). Everyone who is coming from website design wants to get into advertising and people from advertising want to get more involved with websites etc. The truth lies in the middle, the more you know about multiple subjects, the better you would be in combining them.

Of course Peter does never work alone in any campaign. A trusted team of people he works with for a very long time accompanies him in his ventures. Credit to all who worked with him on anything shown here.

Let us start with some techie techie stuff. Group 4 Securicor needed to attract personnel. There arose this simple idea that it would be best to show what your daily duties are going to be by walking along in a day with a security officer. We build a camera that shot everything in 3D and let that be the acor in the movie. When on the website you could look around the route you as a security officer could be taking on a day at work. 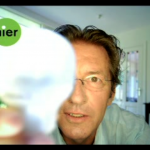 For Greenpeace the strategy was, buy saving lights and thus save the planet because you are saving energy. The campaign was a trough-the-line (another nice word advertising people came up to advertise themselves) campaign as so they say. Radio, television, internet, print ads….all was put into this campaign putting efforts towards this website called onemiljonsavinglights. Here people and companies could register and enter how many saving lights they bought. The campaign got a shitload of publicity. One Dutch newspaper stated that if you are a celebrity and if you are not in the Greenpeace campaign, you ain’t a celebrity no more. Noted that politicians that entered, entered with only 1 saving light. You think they would only do it to get publicity?

For this client we built a system where clients of James could log in. State how much they would want to spend on their employees for any occasion. The employees could then login and pick whatever they wanted. Complete integration with finances etc. Not as sexy as some campaigns but a hell of a job anyway.

Greenpeace has been involved with artists since it has been founded. The project Greenpeacemusic started out as a small thing where you could buy your track online and help save the planet. The project turned out to be bigger than expected and as more and more artists came aboard Greenpeace came more of a recordlabel then an NGO. It had to stop because of it’s own succes.